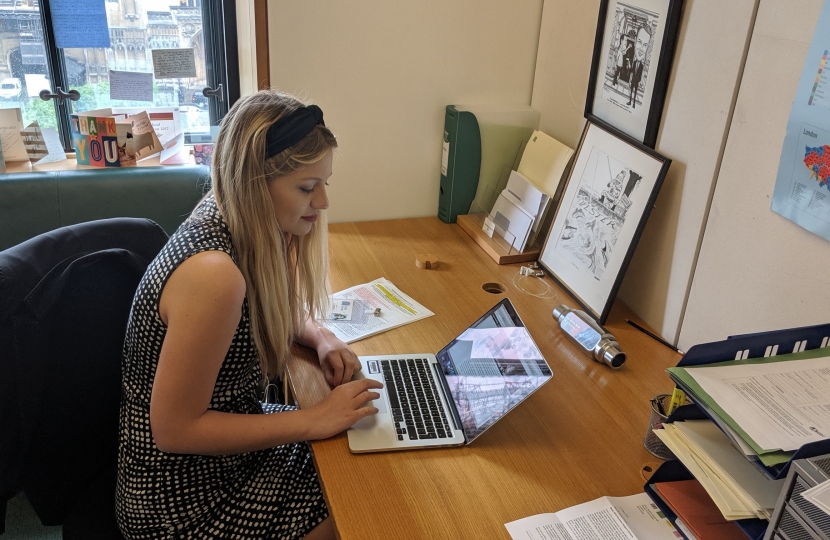 Chris is more than happy to offer work experience to individuals who live in the constituency. It is a great opportunity to learn more about politics, particularly surrounding how parliament works and what goes on in an MP's office. Typically participants get involved in a variety of tasks, ranging from conducting research, attending All Party Parliamentary Groups (APPGs) and meetings with Chris, drafting and proof-reading letters and assisting with administrative tasks in the office. In addition, work experience offers the chance to attend a tour of Parliament and sit in debates in the House of Commons and House of Lords. This is exactly why we offer this work when the house is sitting and not during recess, so that individuals can gain exposure to a naturally busy parliamentary day.

We advise that individuals who are interested are aged 16 and above and have a demonstrable interest in politics- it is especially suitable for students studying A-Level Politics. This owes to the demands of the work that is set and to make the experience rewarding and enjoyable both for the participant and the office. Here are a few words from some former work experience's:

"Having spent a week in Chris' office, I can easily say that my whole perception of working at Westminster and British politics itself has shifted massively. Studying politics at university, working with the team has allowed me to compare the theory with the actual and to see all the hard work that goes on behind the scenes. This week, in accordance to my own interests, I have been writing several press releases, have assisted on campaigns and creating social media content. I completed these tasks with lots of help when needed, but also using my own initiative and having independence to do what I felt was appropriate. My highlights of the week (of course, apart from meeting the office team) was watching Prime MInister's Questions and drafting an urgent question regarding children's services in Northampton. Also, I was very lucky to be invited to Andrea Leadsom's leadership campaign opening, which was a wonderful and unique experience. Being a part of an MP's office, even for just a week, is extremely insightful for a student of politics, or for someone with an interest. The Westminster atmosphere, although surreal at first, quickly becomes normal and welcoming. I would absolutely recommend work experience with Chris to anyone, especially with the team being so kind and accommodating."

"From the 3rd of July till the 6th I spent a week in the office of Chris Heaton-Harris MP. During the week I got stuck into work, summarising cases, writing letters and going to debates. Throughout the course of the week I went to both the House of Commons and the House of Lords and watched them debate over several matters at the beginning of the week I had a tour around the Palace of Westminster which was such a great opportunity. It was interesting to watch first-hand the way politicians work and over the last week I have learnt so much more about the way government works. It has been an amazing week and I’ve had some great opportunities that have taught me skills that will become useful later in life. I have met some amazing people that have taught me the important values of becoming an MP."

"I wanted to take this opportunity because I believed that it would give me further insight into the work and job of an MP and the workings of Parliament as a whole, which is of particular interest to me and it has fulfilled these aspirations. I was assigned various tasks, including writing letters to the local housing associations in light of the recent Grenfell Tower tragedy, summarising constituents' cases and researching the mental health services available in Northamptonshire. I have also sat in debates in both the House of Commons and House of Lords, as well as attending specific meetings between MPs regarding different matters. This week of work experience has been very valuable, as it has allowed me to develop skills within a lively and important environment."

"I have just completed a weeks worth of valuable work experience in Chris Heaton-Harris' office. Throughout the week I have completed various tasks from writing a letter to local primary schools encouraging them to take part in a joke competition, posting news articles to Chris' website as well as enveloping letters to be sent to the post. This week has not only been important to me in gaining work experience into the sector I hope to one day work in, but also to experience the buzz of working in Parliament. I have been able to engross myself into the parliamentary atmosphere by going to Chris' debate in Westminster Hall regarding rescinding article 50, a select committee meeting on international development as well as watching Prime Minister's Question time. I have thoroughly enjoyed this week and have felt at ease working in such a welcoming and friendly office."