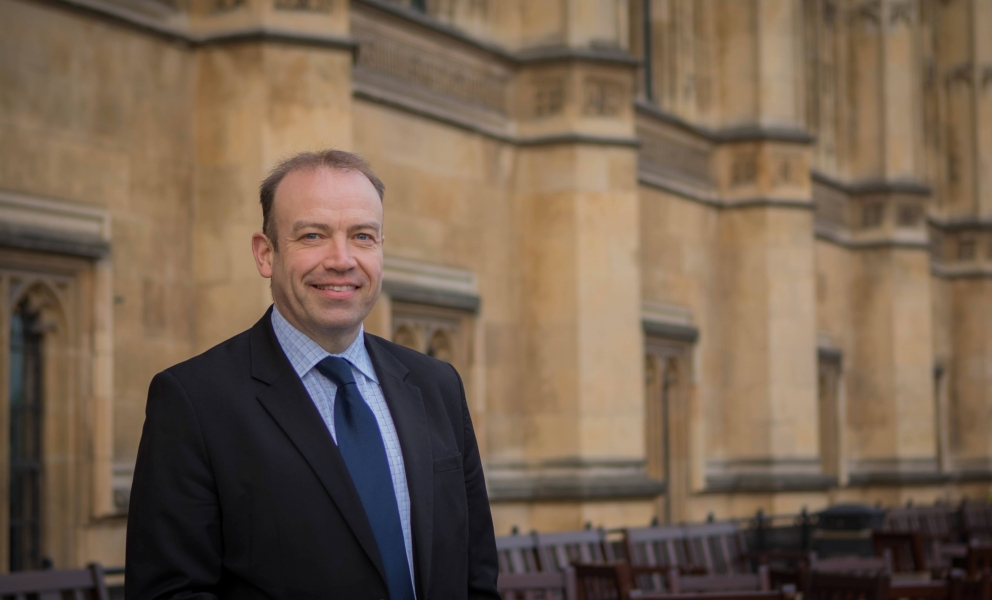 He lives in Pitsford, in his constituency with his family.

Before entering politics, Chris joined and eventually ran his family’s business – a wholesale fruit and vegetable company based in New Covent Garden Market for eleven years.

He is an active and qualified football referee and has been officiating the game at different levels for over 32 years. He currently referees on the Northamptonshire Combination League and is President of Earls Barton Football Club. Chris is well known within football locally, nationally and internationally.

Until recently, Chris was Chair of the Northampton Theatres' Board of Trustees, which oversees the Royal and Derngate Theatres in Northampton.

In the 2009 European Elections, he was named by the “Taxpayers’ Alliance” as being the MEP on mainland UK that was the most “hard-working, committed to transparency and accountability”.

Between July 2009 and April 2010, Chris set up and was Chairman of the EU Sports Platform, which provided a voice for dozens of national and international sports governing bodies and individual teams and clubs in Brussels.

As a backbencher in Parliament, he constantly raised the problems surrounding the very emotional subject of Stillbirth in Parliament and was active in trying to get “selective dorsal rhizotomy” (SDR) routinely commissioned by the NHS. SDR is a life-changing operation that massively increases mobility for many children with cerebral palsy.

A fierce Eurosceptic, Chris was Co-Chairman of the Fresh Start Project – which sought to renegotiate a new relationship for the UK in the European Union, he was Chairman of the European Research Group of Conservative MPs and coordinated the letter to the Prime Minister, signed by 105 other MPs, that asked for a drastic cut to onshore wind farm subsidies and as well as coordinating the campaign in parliament to achieve this cut.

He is an advocate of smaller government and responsible public spending. He was one of the authors of "Direct Democracy" and is a passionate "localist".

Chris was promoted to Assistant Government Whip in June 2016, with a brief in the Cabinet Office and the Department for Education, where Chris was responsible for pushing government business through the House and for Friday business in the Commons and Private Members’ business.

In June 2017, Chris was again promoted to a senior position within the Whips Office, holding the title of 'Vice Chamberlain of the Household'.

In January 2018 Chris was promoted yet again, this time to the role of Controller of Her Majesty’s Household. The prestigious title has existed since medieval times and allowed Chris to continue in his duties to assist in the organisation of the Conservative Party’s contribution to Parliamentary business.

In July 2018, Chris left the Whips office when he became Parliamentary Under Secretary of State at the Department for Exiting the EU (DExEU), working as part of the team delivering on Brexit. This involved coordinating and delivering on policy, contingency planning as well as secondary legislation. He also supported DExEU as they worked to establish international agreements and trade, thereby forming the future relationship between the UK and EU.

However, in April 2019 after much contemplation, Chris decided to leave Theresa May's Government. He was very grateful to be given the opportunity to serve the UK in his ministerial role and was ready to continue to represent constituents as the Member of Parliament for Daventry from the backbenches.

On the 25th July 2019 Chris was appointed as a Minister of State at the Department for Transport, responsible for Rail, Cycling and Walking. Chris coordinated a number of emergency measures to support the rail industry's recovery from the Covid-19 pandemic, introduced decarbonisation initiatives to support the country's Net Zero Strategy, and contributed to a complete restructuring of UK rail, through the creation of Great British Railways.

On the 19 December, Chris was appointed as Minister of State at the Foreign, Commonwealth and Development Office, during a pivotal period in diplomatic politics. His responsibilities included European Trade and Cooperation Agreement negotiations.

In February 2022, Chris was appointed Parliamentary Secretary to the Treasury (Chief Whip).

On the 6 September, Chris was honoured to be appointed Secretary of State for Northern Ireland in Prime Minister Liz Truss' Government.

Whilst his role in politics has somewhat changed overtime, his commitment to the constituency of Daventry has not, and he will continue to represent the people of Daventry to the absolute best of his ability.