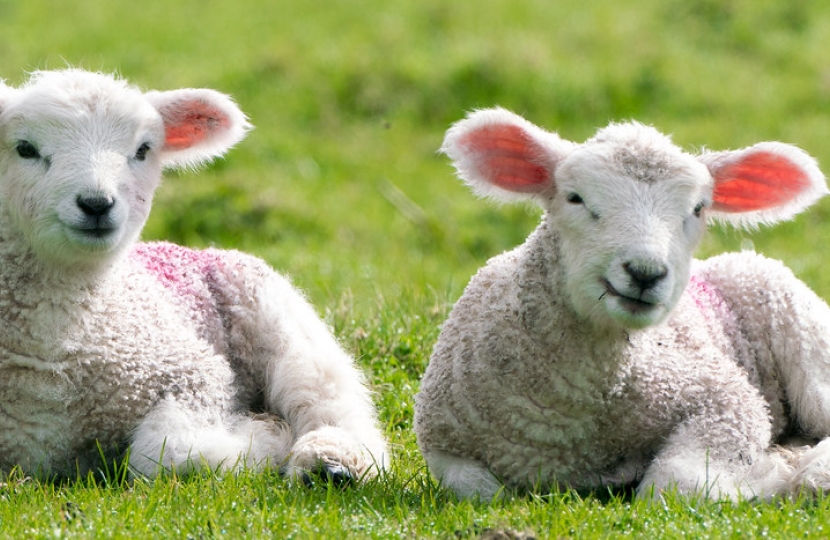 As many of you may be aware there has been an ongoing and very worrying issue on the unlawful slaughter of lambs. I have been raising the issue with local Councillors, the Police and Crime Commissioner, Northamptonshire Police, and the then Secretary of State for Department for Environment, Food and Rural Affairs, Michael Gove MP.

From my contact with Sam Dobbs, District Police Sergeant at Northamptonshire Police I can provide the following information:

Operation Stock is the name of the response by Northamptonshire Police to a series of crimes involving the inhumane illegal slaughter of sheep in fields, their butchering and theft. Operation Hillman and Operation Volcanic are the operational names for the responses given by Leicestershire Police and Warwickshire Police into like offences in their counties.

These crimes are highly organised and currently without any witnesses, with the following modus operandi:

Identification in advance of fields and livestock (market-ready lambs) by persons unknown. It is thought that sheep and fields are marked in some way (rope tied to gates, paint applied to livestock.) The identification of lambs is discerning, by people who appear to know the lambs that are most-market-ready. Older ewes or smaller animals are not selected.

Overnight attack on the identified flock, presumed by gangs of offenders who round up the selected sheep. Offenders either unhinge a metal gate and secure it vertically to provide a hanging point, or use electric wire to create a hanging point in a tree. The lambs have their throats slit and are allowed to bleed out in the field, before being strung up and butchered proficiently. Heads, feet, intestines, paunch are all then disposed in situ and the carcasses stolen.

It is presumed that the meat is then passed into the food chain, outside all the safeguards afforded in the regulated farming/meat industry, with the Farm Assured and Red Tractor schemes. On at least one occasion, this has meant that lambs on medication which should not enter the food chain for forty days, have been supplied for consumption. For this reason, the Police are liaising closely with Trading Standards Authorities and the Food Standards Agency. The NFU is keen that this angle is kept in proportion, with a fear that the public might be put off from buying lamb.

There is little doubt that these offences are linked, and linked further with offences across the county borders. The incidents in late June and early July were cause for criticism of the policing response, with some justification, given the assessments of threat, harm and risk by the Police, which meant that they were not given the immediate response expected – in that farmers were kept waiting for an officer, whilst coping with the gruesome sights and smells of slaughtered flocks, let alone the logistical nightmare of lawfully disposing of the remains. This situation has been recovered now, with NFU and the farming community reporting they are happy that the matter is being taken seriously.

It is worth noting that whilst these are abhorrent and emotive offences, the framework of the law means that they are treated as criminal damage and theft in the first instance, as the lambs are treated as farmer’s property. The Police's response has to be measure against the impact too. This is especially relevant when considering one of the victims, from the Crick incident, was unfortunate enough to discover the slaughtered flock whilst taking her children on their daily route from school, via the flock, and the children saw the nightmare scene. She appeared on BBC Radio 2’s Jeremy Vine Show. The police asked to give their perspective and this all raised the issue at national and county level. When there were more offences, Operation Stock was created.

The NFU has been incredibly helpful as a critical friend and hosted a farmers’ meeting at a barn in Thornby, attended by over 130 local farmers and landowners. It was a tense but productive meeting where the Police explained the very basic and elementary strategy, given the lack of witnesses, intelligence or information.

The road signs have been successful, and the operation has had some notable successes, falling short of prosecuting offenders (as yet).

Most lambs will have gone to market by the end of August, but even when the immediate crime trend has rescinded, this issue has brought into sharp focus the whole issue of rural policing. Operation Stock is a metaphor for rural crime generally, and also, ironically, for metal theft from our rural churches, so there will be much to debrief later in the year. I am very aware of the active interest and support of both the Commissioner and Chief Constable, given plans they share to increase the footprint of policing in our largely rural county.

Rest assured, I will of course continue to keep everyone updated on any developments that may occur:

I have been in constant contact with Sam Dobbs and I have recently received an update from him:

"Two incidents have understandably caused shock and repulsion in the local and virtual/social media community, with the unlawful killing and butchering of lambs on farms in Daventry District. The first, in Crick, on Sunday night into Monday (7/8th) saw fourteen lambs killed. The second, in Whilton, on Tuesday night into Wednesday (9/10th) saw around 21 lambs killed. In both incidents, the lambs were slaughtered and apparently corralled by means not yet known, hung up on gates removed from the location and upturned, and butchered in the field."

Continued onto PDF below...