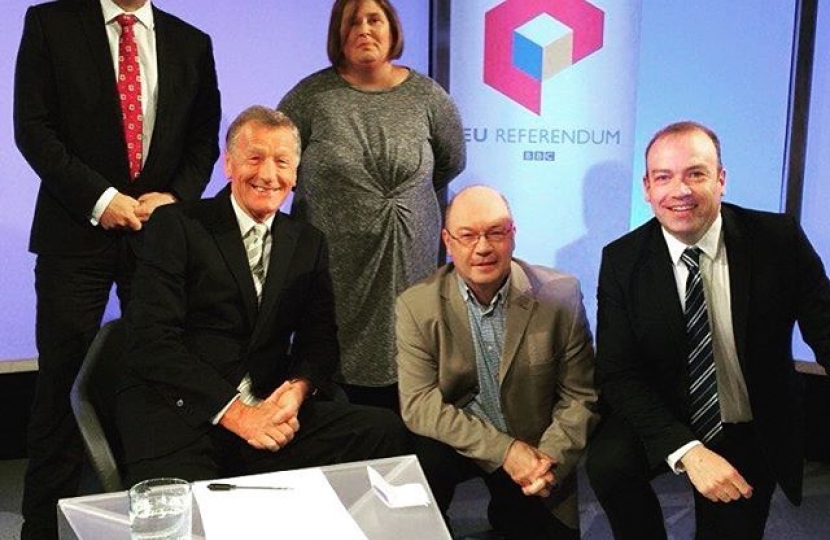 On Monday the 23rd October the Prime Minister outlined her vision for the future of our relationship with the European Union in light of the recent EU Summit. In her speech, the Prime Minister reiterated the idea that ‘no deal is better than bad deal’. I wholeheartedly agree with this sentiment and will refuse to allow the European Union to hold us over a barrel regarding a future deal. The Prime Minister maintains she is confident we will get a good deal for all parties involved and by December we will see significant progress in this area.

Make no mistake about it, Britain is leaving the European Union. Yet we will continue to play a full and active role inside the EU until we leaves. The referendum vote last June was about something more than simply leaving the European Union. It was a vote for change: to make Britain stronger and fairer – restoring national self-determination while becoming even more global and international in action and spirit.

The UK’s vote to leave the EU was in no way a rejection of European values. The UK’s dedication to ensuring the continued prosperity of the European people remains resolute and it is unconditionally committed to maintaining the security of the continent. We may be leaving the EU but we are not leaving Europe. We will always work with our international partners to defend democracy, human rights and the rule of law.

So in that spirit, we are not seeking partial membership of the EU, associate membership, or anything that leaves us half-in, half-out. We do not seek to adopt a model already enjoyed by other countries or hold on to bits of membership as we leave. Instead we will seek to form a new and equal partnership – between an independent, self-governing, Global Britain and our friends and allies in the EU.

Article 50 has been invoked and the EU treaties are clear that the UK will be leaving the Union in March 2019 whether a withdrawal deal is agreed or not.

Article 50 was invoked in accordance with the UK’s constitutional arrangements as required by EU law and as defined by the UK Supreme Court. MPs from across the political spectrum voted in March 2017 to invoke Article 50 by 494 votes to 122.

Personally I believe trying to make some distinction between a so called 'hard' and 'soft' Brexit is misleading and pointless. The UK either leaves the EU and its institutions or remains a full member.

Leaving means leaving the EU, its institutions and the single market. Staying in the single market would mean keeping freedom of movement would and would, in effect, not be leaving at all. We would be in the absurd position of being in the EU, but not having any say over the EU regulations that would continue to affect. The UK would also not have any control over the number of EU citizens coming to the country.

It should also be noted that if we wished to rejoin the EU, we would be subject to the same requirements as any new candidate country, which would include adopting the euro as our currency.

I have taken the liberty of reiterating the Government’s 12 point negotiation plan that was first published back on the 2nd February, which amounts to one big goal: a new, positive and constructive partnership between Britain and the European Union.

Most emails I receive on Brexit are related to three distinct areas: security and defence, international development and international trade. I would like to touch on each of these to help allay any concerns.

First, security and defence: The UK remains committed to operations and missions around the world as a strong and reliable ally: for example, in continuing to play our part in countering Daesh. The UK will continue to be a leading member of NATO. We are also a permanent member of the UN Security Council, a member of the Commonwealth, the Organisation for Security and Cooperation in Europe, and the Five Power Defence Arrangements in the Far

East. The UK also has strong and valued bilateral relationships in the defence and security field with countries around the world. Leaving the EU will not change any of this.

Second, international development: As an outward-looking, globally engaged nation, I believe that the UK should work to tackle international problems at their source - not wait for them to arrive on our doorstep. The UK will continue to play a leading role in international development: the Government remains committed to spending 0.7 per cent of national income on development assistance, and to achieving the UN’s Global Goals and ending extreme poverty by 2030. The Department for International Development is helping developing countries leave aid dependency behind and become our trading partners of the future and will continue to do this post Brexit.

Third, international trade: Withdrawing from the EU will give us the opportunity to shape our own international trade and investment opportunities, drive even greater openness with international partners and put Britain firmly at the forefront of global trade and investment. The Department for International Trade is working closely with counterparts across a wide range of markets in order to promote the UK as a great place to do business and with which to trade. The Government is taking advantage of all of the opportunities available to us to ensure that Britain becomes the global leader in free trade once we leave the EU. Please note when you hear people say we must stay in the ‘Customs Union’ they are actually saying we should not have the ability to make our own international trade deals and the EU should continue to do this for us.

Lastly, to those of who are fearful for the future I would like to remind you that that the UK is the world’s fifth largest economy with a booming capital city. We have the greatest global ‘soft power’ influence of any country and one of the world’s most accomplished armed forces. I truly believe that we can thrive outside of the EU so I am feeling rather bullish about Britain’s future and I am looking forward to breaking free from the constraints of Brussels.