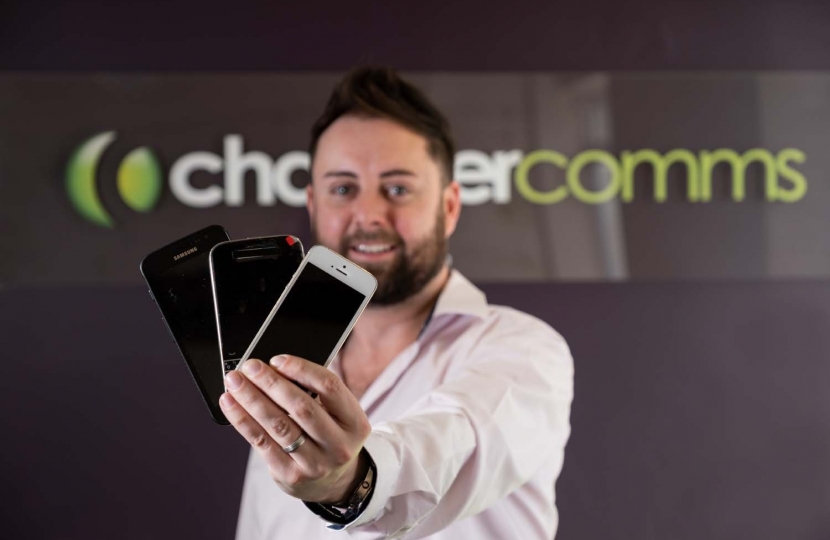 Chandler Communications of Northampton is launching a charity campaign that sees the company take in old mobile phones and turn them into cash to help the homeless.

The campaign – called Phone To Home – launched on Wednesday 1st May 2019. The team at Chandler Communications are calling on the local business community to get involved.

Essentially, the campaign will work in the same way as a mobile recycling website. People will donate any old mobile phone handsets to the team at Chandler Communications and they will recycle them and receive a payment. These payments will all go to Northampton Hope Centre to support it in the provision of practical services that help people survive poverty and homelessness.

The team wanted to do something to help Northampton Hope Centre after attending the Northamptonshire SME Business Awards last year, at which the company picked up the award for Best Customer Service for the third consecutive year. Northampton Hope Centre gave a talk at the event, during which the room was told that the charity had to leave its premises within 12 months, and it needed to raise around £300,000 for new premises.

James Ryan, sales director at Chandler Communications​​​ said ​​​“We were touched by the presentation at the awards. Homelessness is prevalent in Northampton and charity begins at home. We are a Northampton-based business keen to do something to help. We know that most people - particularly businesses - have old mobile phones laying around in drawers that can be turned into money to help support Northampton Hope Centre.”

Businesses or individuals interested in donating mobile phones to the Phone To Home campaign can contact James on 01604 880507 or james@chandlercomms.co.uk. Handsets must be in a usable condition and able to switch on, and the team are happy to collect them from businesses in Northampton.