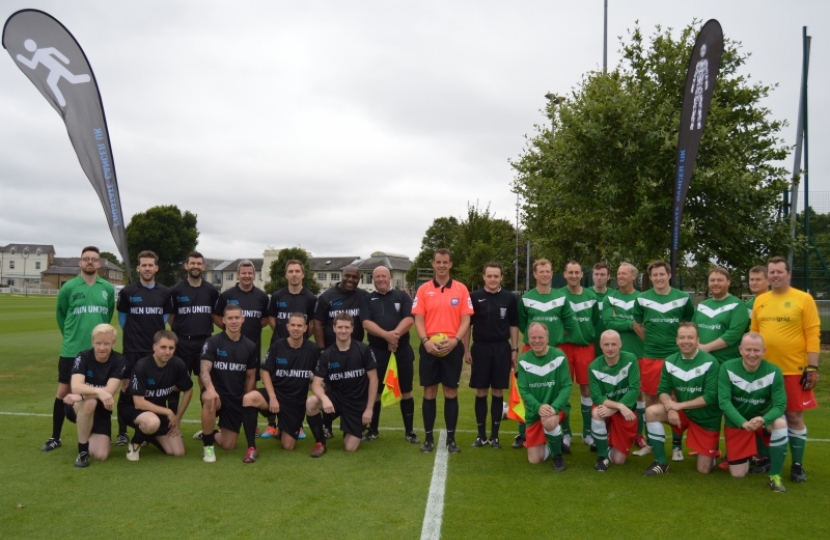 Chris Heaton-Harris MP produced a solid performance for the UK Parliamentary Football Team (UKPFC) against Prostate Cancer UK’s Men United XI at Fulham’s Motspur Park this Tuesday 14th July. In a competitive clash in South London, the Parliamentarians, captained by Clive Betts, MP for Sheffield South East, were beaten 6-2 despite a valiant performance. Had fate (and the referees) not intervened for a total of 3 disallowed goals, the resulting score of 6-5 would have much more accurately reflected the Parliamentarians’ effort!

Prostate Cancer UK is one of the current official charity partners of the All Party Parliamentary Group on Football. At the end of the match the winning side were handed a cheque for £10,000 from funds raised throughout the year from the UKPFC to go towards Prostate Cancer UK’s extensive research and services programmes. There were a few facetious grumbles from wounded prides that a portion of the donation ought to go towards Infrared Offside Detection Devices for future Men United contests.

Prostate Cancer UK is also currently an official charity partner of Fulham FC, who supported today’s match by hosting the game and former Cottagers star Sean Davis rolled back the years as he guested for Men United.

Chris, an avid football fan and Grade 5 referee said: “Prostate cancer is an issue close to the hearts of the UKPFC and, despite being on opposing sides on the pitch, we continue to proudly support all those at Prostate Cancer UK in their ongoing work to improve the lives of those affected by the disease now and in the future. The more we work together, the sooner we can reduce the number of lives tragically lost to prostate cancer and improve the quality of life of those men living with it.”

Dr Sarah Cant, Director of Policy and Strategy at Prostate Cancer UK said: “We are hugely grateful to the UKPFC for all their support over recent years and for today’s generous donation of £10,000, which echoes the 10,000 lives which are lost to prostate cancer every year. We will continue to work closely with MPs at a local and national level, to get men with prostate cancer the better diagnosis, treatments and services they desperately need.”

People are encouraged to visit www.prostatecanceruk.org/menunited for more information about the group or to sign up and show their support. Anyone with concerns about prostate cancer can contact Prostate Cancer UK's Specialist Nurses in confidence on 0800 074 8383. The Specialist Nurse phone service is free to landlines and open from 9am to 6pm Monday to Friday with late opening until 8pm on Wednesdays.