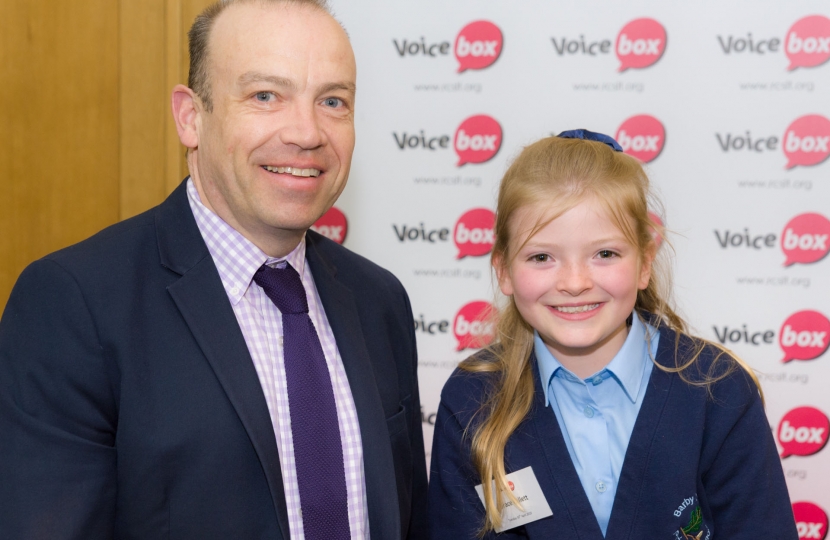 Since last autumn, over 5,000 children have taken part in Voice Box – the joke-telling competition for schools in England and Scotland. Eighteen made it through to the final at Portcullis House, Westminster in London on 30 April 2019, with Nick Smith MP acting as Master of Ceremonies. One of them was local schoolgirl Grace Pallett from Rugby, Warwickshire.

I just realised I haven’t done the Hokey Cokey for a long time – I think I’ve just forgotten what it’s all about.

Grace was presented with a Voice Box certificate and goodie bag for making it through to the final.

Asked what she would like to be when she grows up, Grace responded: “I want to be an author and an illustrator.”

Voice Box is an annual competition, organised by the Royal College of Speech and Language Therapists (RCSLT) and partnered by National Association of Head Teachers. It aims to remind people that there are children in every classroom who need support to help them speak and understand what is being said to them.

More than 10% of children and young people have long term speech, language and communication needs which create barriers to communication or learning in everyday life. This includes 7.6% of children who start school with developmental language disorder – a condition where children have problems understanding or using spoken language, with no obvious reason for these difficulties – and 2.3% who have difficulties associated with another condition, such as autism or hearing impairment.

I am pleased to support Grace at Voice Box and very proud that she got to the finals. The event has demonstrated how communication skills help children to have the best start in life. Public speaking is a part of my daily life and I fully appreciate the work teachers and speech and language therapists do to help children to communicate as well as possible.

RCSLT Chief Executive Officer Kamini Gadhok MBE said: “In every classroom there will be between two and three children with communication difficulties. The Voice Box competition helps teachers, children and parents to focus on the impact effective communication can have on a child’s social and emotional well-being.”

Today, the Government’s Kickstart grants scheme opened for applications. These grants will help small and medium-sized businesses affected by COVID-19 to deal with the initial impact of the pandemic and purchase specialist advice, equipment or technology to help restart and rebuild.