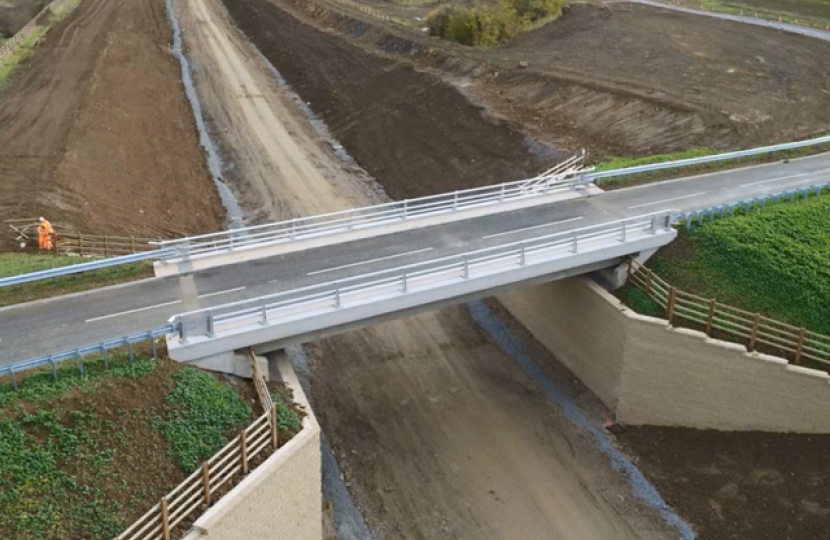 The A45 Daventry Development Link opened to traffic on Thursday, November 15 with a ribbon-cutting ceremony signalling the completion of the 3.5 mile route.

The Northamptonshire County Council scheme has seen the building of a single carriageway which will improve transport links between the towns of Northampton and Daventry, and improve access between Daventry and the M1 motorway.

The project will also relieve communities in Flore, Weedon and Upper Heyford of through traffic as well as supporting future growth in the Daventry district.

Cllr Ian Morris, county council cabinet member for transport, highways and environment, said: “I’m absolutely delighted that this road is opening as it has wide ranging benefits for people in the local area.

“Not only does it improve transport links but it also helps unlock housing growth in the Daventry area.

“But perhaps most importantly it is the people in the nearby villages who will be thrilled to have this road which will make their communities safer."

Judith Barker, Director of Programmes and Governance at SEMLEP, added: “This link has speeded up the time it takes to get into Daventry, improving the predictability of journey times for local businesses. This opens new development and business opportunities for the area.”

Cllr Chris Millar, Leader of Daventry District Council, said: “We are very pleased to have worked with our partners to deliver this project, which will bring so many benefits to both Daventry and the wider District.

“The link road will relieve traffic in the villages it bypasses, and is key to our long-term plans for the sustainable growth of Daventry, so we very much look forward to it opening.”

Highways England planning team leader for the East Midlands, Kamaljit Khokhar, said: “Our roads are vital for the country and its economic success; they connect businesses and communities and support employment and new homes. Improvements such as the A45 Daventry Development Link, delivered with the help of Highways England’s Growth and Housing Fund budget, will ultimately ensure our roads continue to improve journeys and unlock the potential for new jobs and homes.”

The project has been delivered in conjunction with the council’s highways partner, KierWSP, and the development contractor Balfour Beatty. Construction of the scheme began in July 2016.

The budget for the A45 Daventry Development Link is £40.9million, funded by the SEMLEP Local Growth Deal, the Highways England Growth and Housing Fund, Northamptonshire County Council, Daventry District Council and developer funding.

Designed and constructed by KierWSP and Balfour Beatty, the link road starts at a new roundabout on the existing A45 between the settlements of Dodford and Weedon, to the east of Globe Farm.

It then passes to the north of the villages of Weedon, Flore and Upper Heyford before rejoining the A45 at a new roundabout between Upper Heyford and the M1 motorway at junction 16.