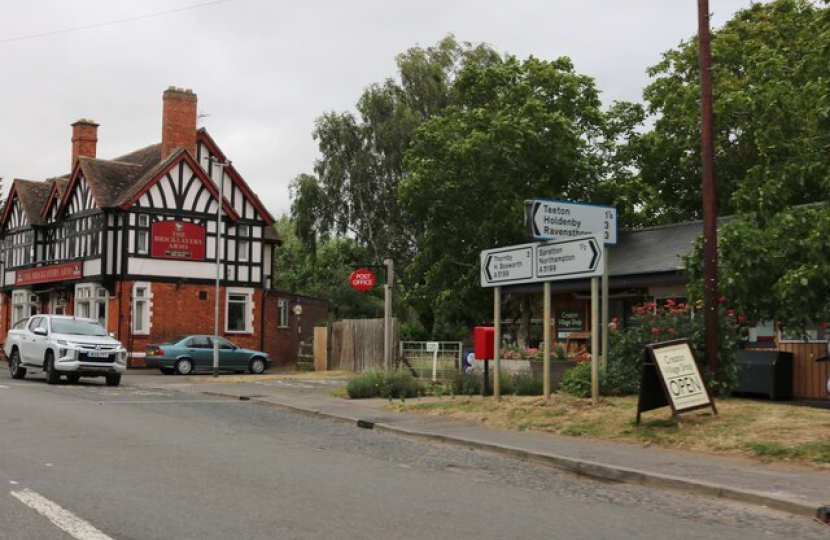 Please see my latest news article for a full update on Highgate House in Creaton (here).

Following a meeting in Creaton Village Hall today (03.01.23) regarding the Home Office's decision to use Highgate House Hotel in Creaton to house asylum seekers, I am creating an online consultation to collate local views on the situation to submit to the Home Office for consideration. Please feel free to share this link with neighbours, friends and family in the local area.

For those residents who have not already been in touch with me directly via email, I have included my latest update below. Please feel free to email me at chris.heatonharris.mp@parliament.uk if you would like future updates (including your full name and postal address). If you know someone who would like to submit a response, but they do not use technology, please feel free to email me a scanned version of their response (or photo) to the above email. Physical responses can be submitted to my office, however I would like to submit this consultation as soon as possible and so I cannot guarantee that physical responses will be included.

Thank you to everyone who attended the Creaton Parish Council meeting yesterday. This matter has now featured on BBC Look East (09.01.23) and GB News (10.01.23) where a range of interviews have been broadcast from myself, Creaton Parish Council Chairman James Hill and local councillors David Smith and Cecile Irving-Swift.

I have engaged in extensive conversations this week with the Minister for Immigration, Robert Jenrick, and we can expect a full update on the matter within the next few days. I can confirm that the rumour that asylum seekers will be arriving to Highgate House this week is false.

If you have any further questions, please do not hesitate to email me at chris.heatonharris.mp@parliament.uk.

As you would expect, as soon as I heard that this was being proposed I contacted both the Minister responsible and Home Office officials to tell them that Highgate House is a totally unsuitable location to place so many illegal migrants. I gave a long list of reasons why, some of which were raised in Creaton today, including the rural location, impact on medical services, the lack of transport links, lack of local facilities and a list of issues West Northamptonshire Council also asked me to raise.

However, it seems the Home Office has decided it needs to utilise Highgate House; a decision I struggle to understand.

For full transparency, Highgate House will likely be in use from early 2023. I will update residents as soon as the Home Office provide an exact date, however I received an update today (Tuesday 3rd January) from the Home Office confirming that they are undertaking a further consultation before moving asylum seekers onto the site.

I have created the below space for residents to submit their own concerns and I will pass these across to the Home Office and the Minister for Immigration, Minister Jenrick.

Of course I do realise that over 40,000 people have illegally crossed the Channel in small boats this year - which is unfair on those who come here legally, unfair on our local public services, and unfair on the British people who play by the rules.

This is a global illegal migration crisis with long-term pull factors and criminal gangs who treat human beings as cargo. This global issue is now having ramifications locally and despite strong efforts made already - which have been challenged by human rights lawyers at every step and opposed vigorously in the House of Commons by opposition parties - it is clear that we need to do more.

There is obviously no silver bullet or overnight fix for this problem; however before Christmas the Prime Minister and the Home Secretary set out 5 new steps to curb illegal migration:

1. A new agreement with Albania so that the vast majority of Albanian claimants can be removed- with weekly flights until all Albanians in our backlog are sent home.

4. Cheaper accommodation sites so we can move migrants out of expensive hotels.

5. Clear the initial asylum backlog by 2023 by doubling the number of caseworkers and radically streamlining the process.

The Prime Minister also announced that early next year, the Government will introduce new legislation to make it clear that if someone has entered the UK illegally, they should not be able to remain, but should be swiftly detained and removed to their home country or to a safe third country. They will no longer be able to frustrate attempts of removal with late claims- and once removed, they will have no right to re-entry, settlement or citizenship.

Just to completely clarify the point, this is where our relationship with Rwanda comes into play - and the policy to move people swiftly to a safe third country where their applications can be processed legitimately is one that has been challenged hard in the Courts and is opposed by Labour and the Liberal Democrats.

However, without this and the other new policies being in place, the various pull factors that bring people to our shores (travelling through various other “free” countries en route) will remain stronger than the deterrents.

Over the last few months I have been contacted by many residents concerned about the Ibis Rugby East in Crick being used to accommodate asylum seekers; another wholly unsuitable place to house illegal immigrants and asylum seekers. The Home Office have, however, confirmed that the Ibis hotel is likely to be used for the duration of the 12-month contract and so I have been working hard with local people, the Parish Council and others to ensure community needs are identified and met. I recently held a meeting in Crick on this matter and have created a dedicated page on my website where residents can receive a full update on the situation.

I’ll do the same for residents effected and concerned about the use of Highgate House - and will continue to make the point to the Home Office that this is a dreadful choice of location for all concerned.

I will update my website regularly with updates on all the developments around Highgate House and should you have any further questions, do not hesitate to get in touch at chris.heatonharris.mp@parliament.uk .

Saturday morning I held a coffee morning at The Cromwell Cottage, Kislingbury. Big thank you to the staff for taking care of us and for keeping us warm with the beautiful log fire!